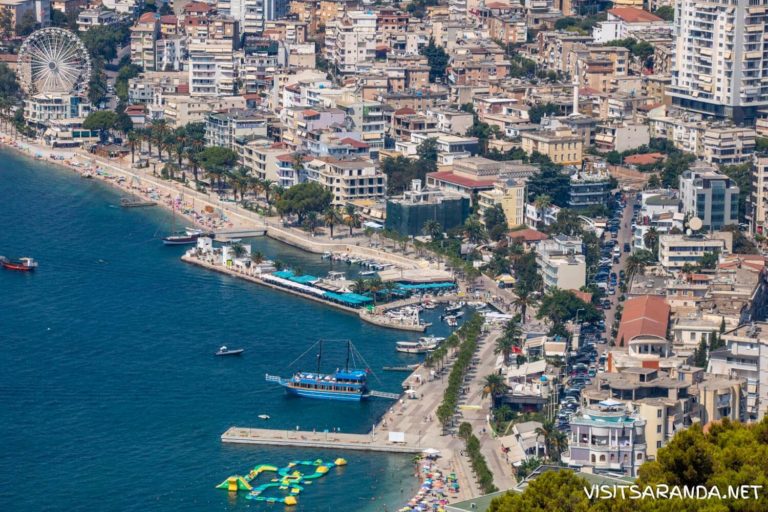 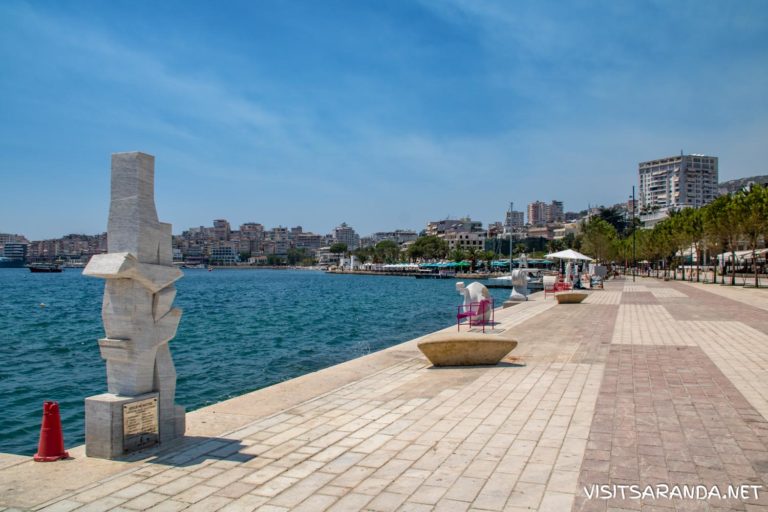 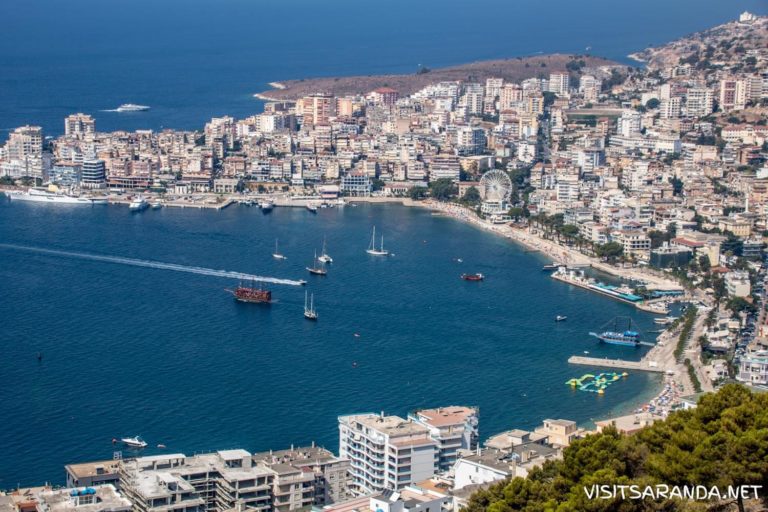 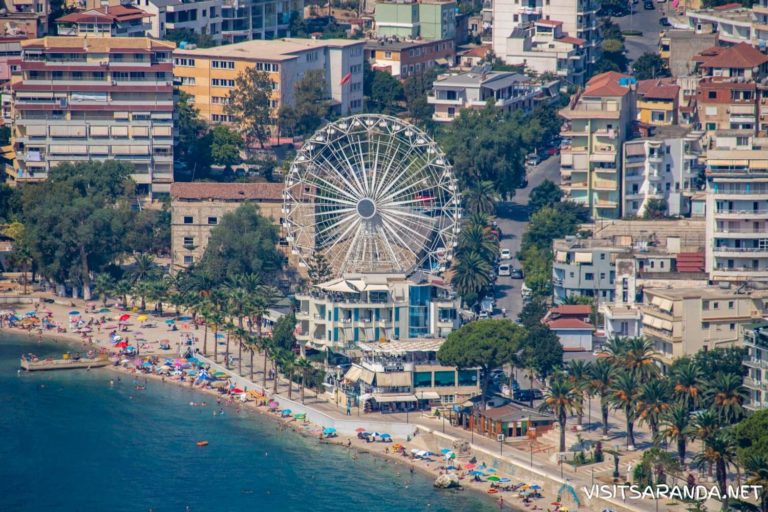 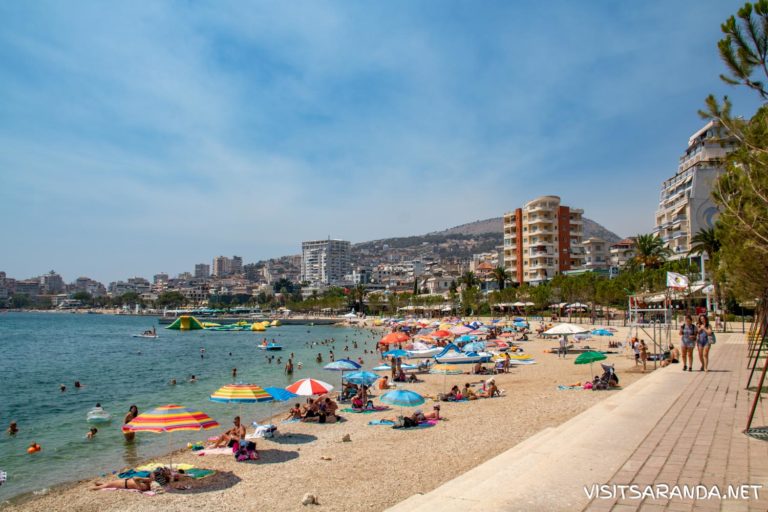 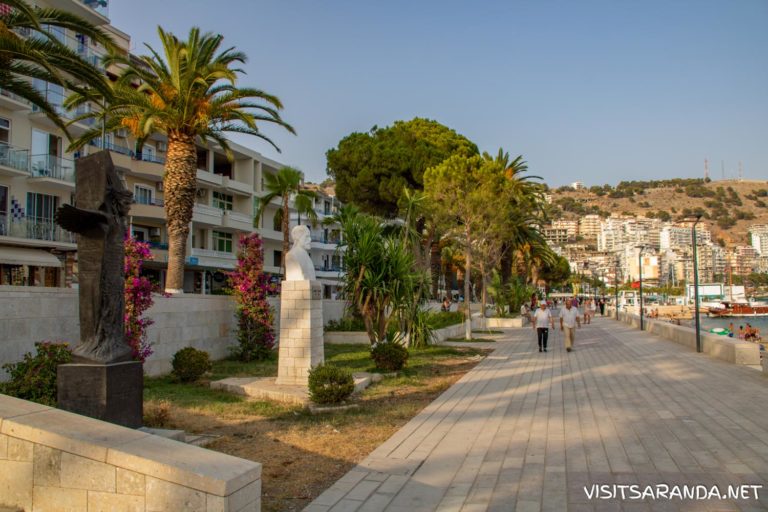 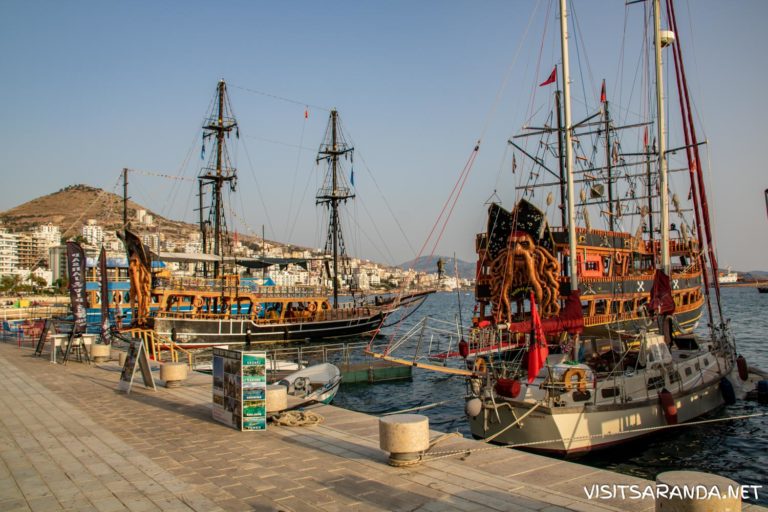 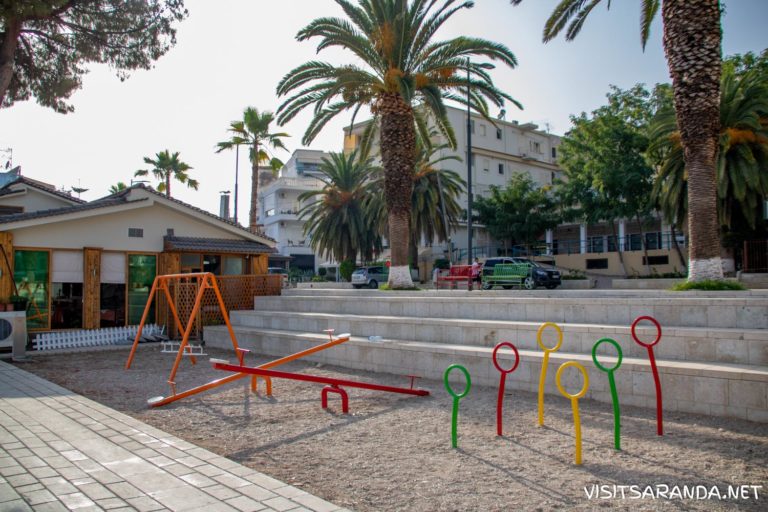 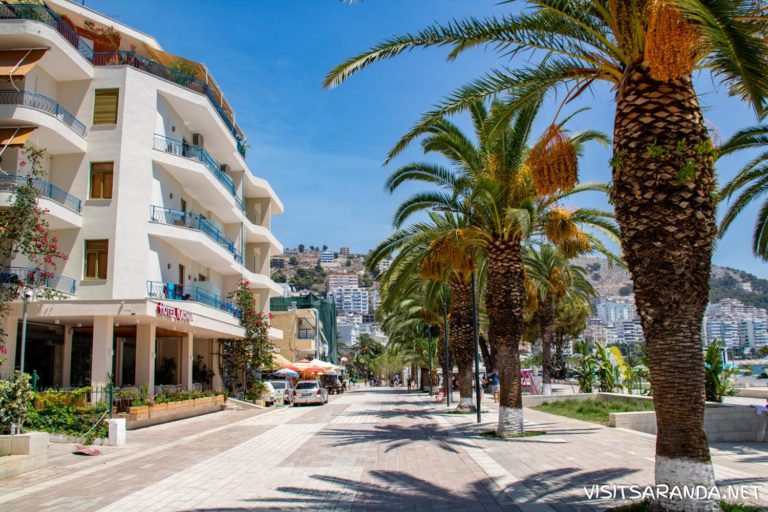 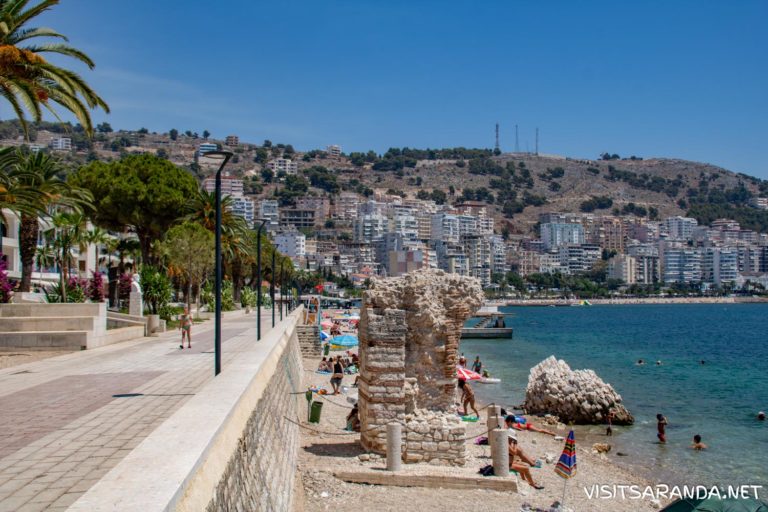 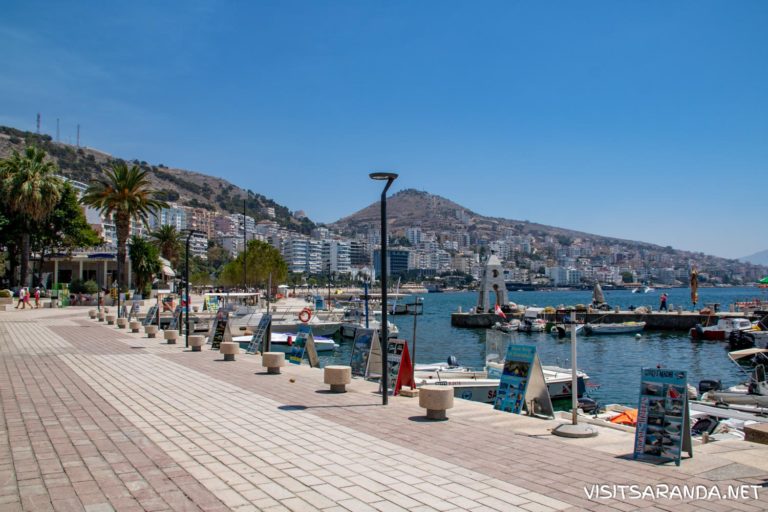 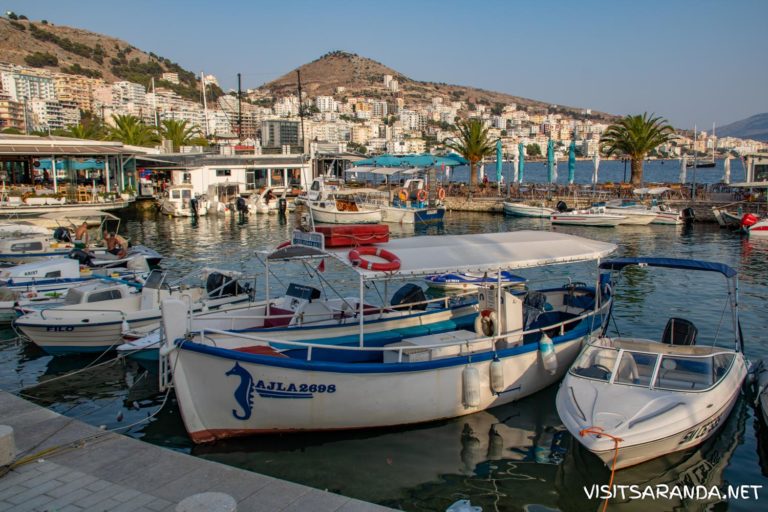 Saranda has a boulevard that stretches for over 1 kilometer around the entire bay. The pedestrian promenade starts at the ferry terminal in Kodrra and follows the public beaches all the way to the main road at Rruga Butrinti. It’s well worth a stroll for its scenery, vibe and it’s bustling with restaurants with outside seating for a bite or a refreshing drink.

In the evening you’ll see many locals coming out of their houses for their Xhiro. Xhiro is a typical Albanian social habit which usually combines an evening walk with meeting friends for a coffee or other beverage.

Starting the walk from the ferry terminal, you’ll first walk past some bars and Luna Park Gjika with bumper cars, a carousel, air hockey and other games.  Further on Bulevardi Hasan Tahsini you see the statues of Hasan Tahsini and Bilal Xhaferri and a bit further the one of Nikolae Iorga.

Alongside the boulevard is the public beach on which you can find some archaeological remains. Ancient Onhezmus was a fortified city and parts of an entrance gate have remained on the beach. Parallel to Bulevardi Hasan Tahsini, on Rruga Jonianet, you can fin another part of the fortification gate inside Hotel Republika.

A short stroll further down the boulevard is the Saranda Marina where you might see local fishermen coming back with their catch of the day. This is also the place where you can take boat trips to explore more of the Albanian Riviera.

On the pier is Bar & Restaurant Limani which is a great spot for a refreshment with outside chairs on the water. It’s one of the most popular restaurants for a reason: it’s the only restaurant uniquely located on the water for a 360 degrees view on both the sea and the promenade.

In front of the marina you can also find the customs house, which hosts the Museum of Traditions, and the Galeria Art Saranda.

The last part of the pedestrian promenade is called Shëtitorja Naim Frashëri where you can the second part of the public beach and some more bars and restaurants. There is also the orthodox Church of Saint Charalambos. 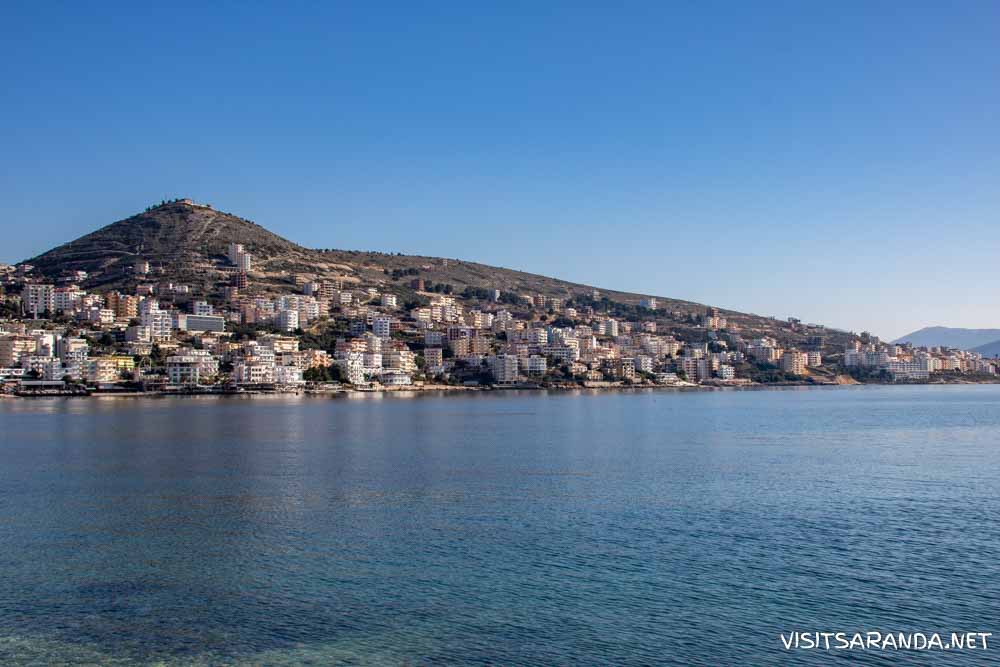 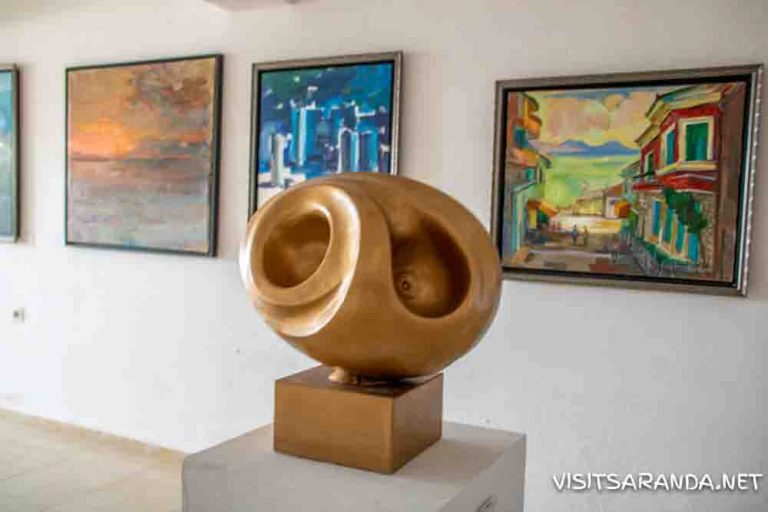 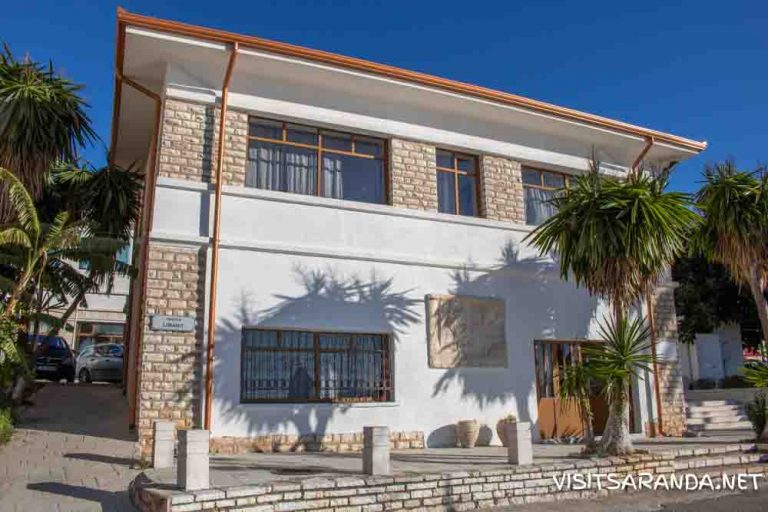 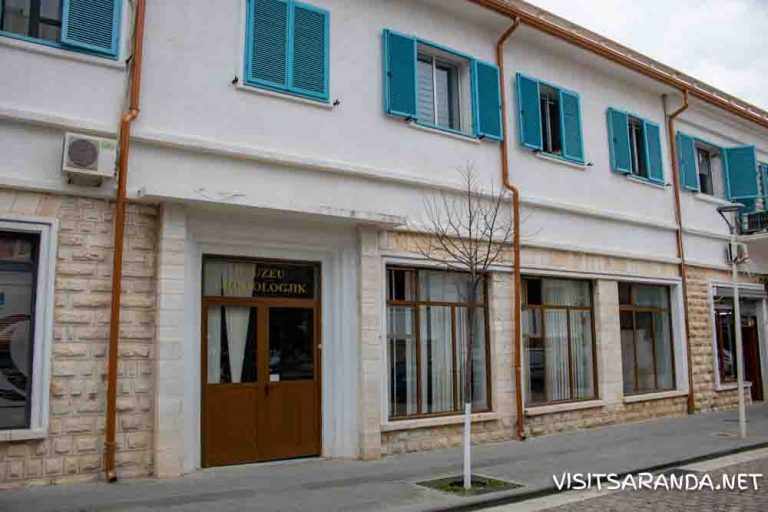