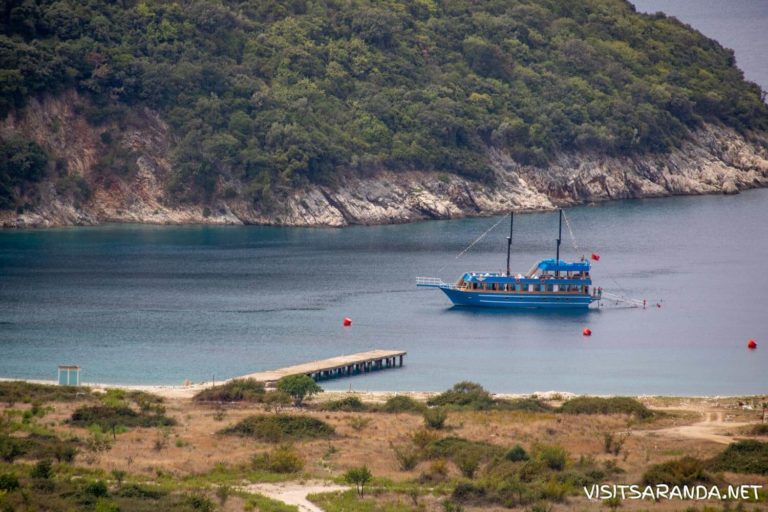 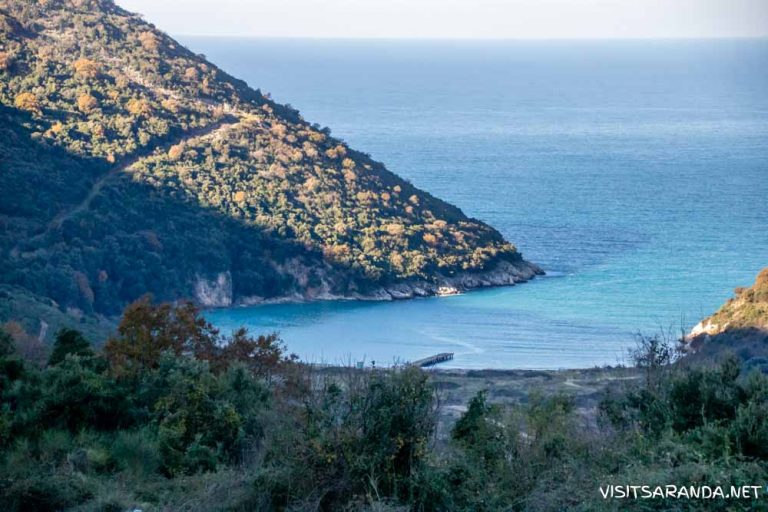 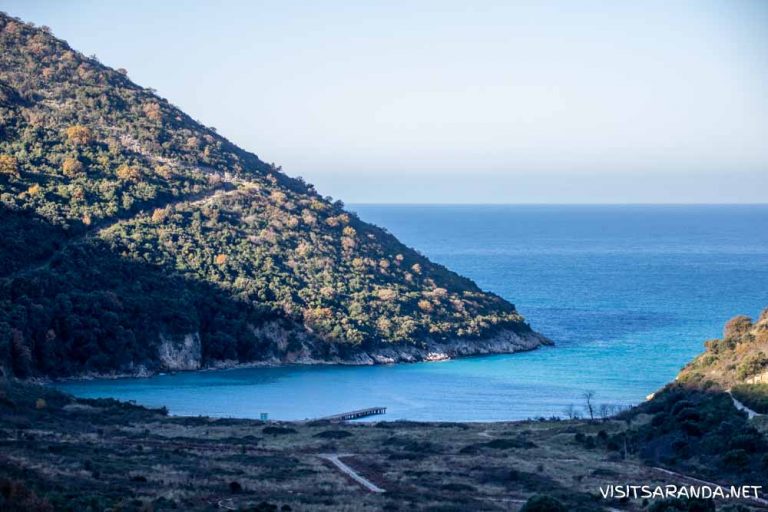 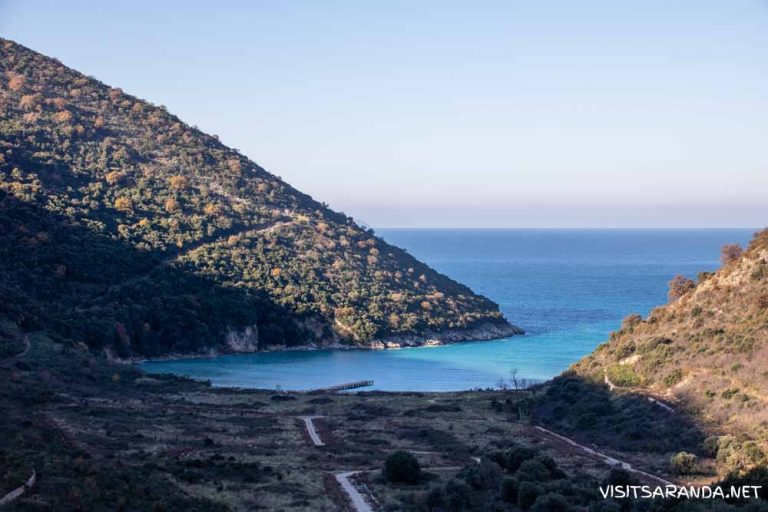 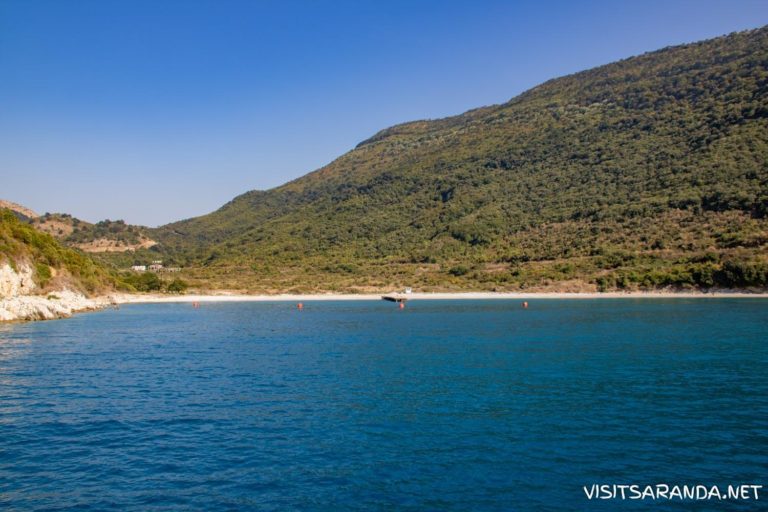 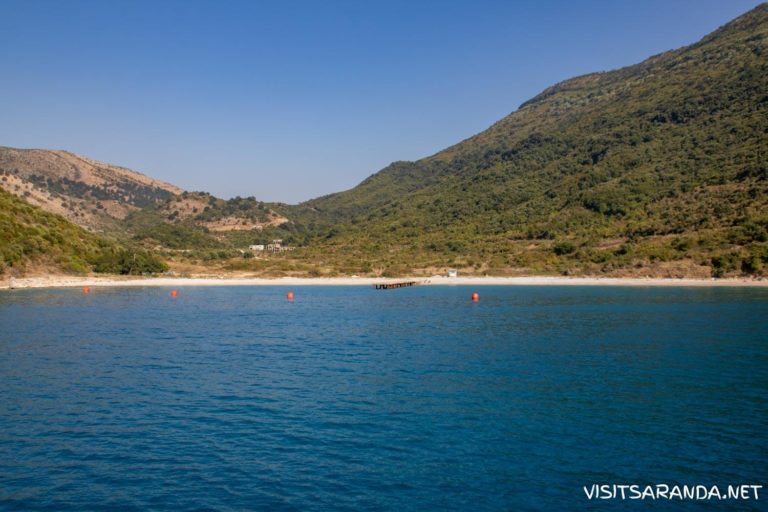 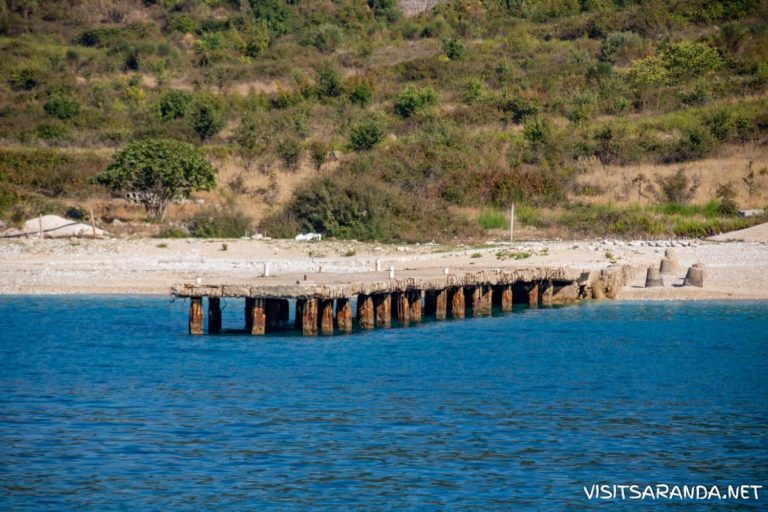 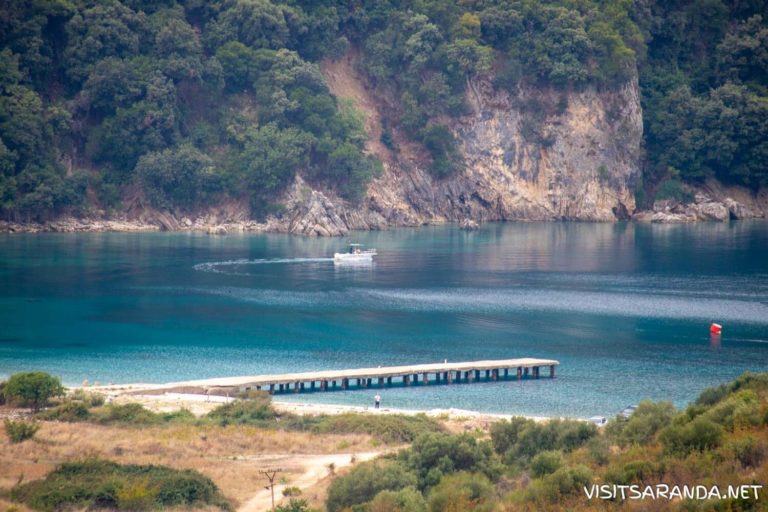 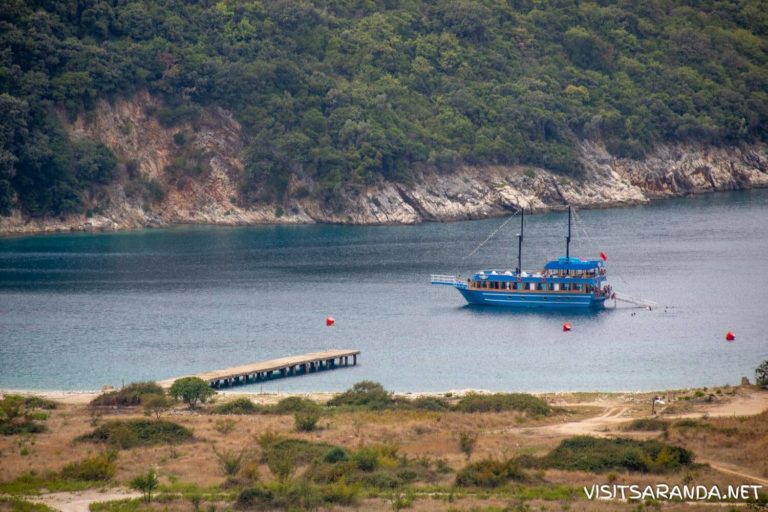 Kakome Beach (Plazhi i Kakomesë) is a beach that is completely secluded in a bay (Kakome Bay). The surroundings are beautiful and green and the beach is totally deserted. Apart from a pier that you can jump off from, there is nothing to do which makes this place so special.

However there is another side to it as well. There are no hordes of tourists and there are not hotels or restaurants because the area is actually private and closed off for the public. Once some developments started, but the plans were deemed illegal so the construction was stopped and nothing happened ever since.

How To Get To Kakome Beach

The official answer is that you can’t get to Kakome Beach since the area is private property. Kakome Beach is located about 13 kilometers north of Saranda and because some construction once started, there is a road that almost leads to the beach, but the last part is literally closed and guarded so you can’t reach the beach overland.

The alternative is to reach the beach by boat. In the summer months you can find many boats offering tours that include a stop at Kakome Bay from the beachfront promenade in Saranda. There are several big boats with a fixed schedule, including some tall pirate ships, but also many smaller boats to accommodate smaller groups and more flexibility. Most boats depart around 9 or 10 in the morning and make several stops between Saranda and Krorëza Beach.

The big boats will only stop for swimming in Kakome Bay, because they’re officially not allowed to dock at the beach, because it’s private property. However, we regularly notice people posting pictures from Kakome Beach so you might have more luck with the smaller boats to turn a blind eye or if you organize your own private boat tour.

Since the area is officially closed and non of the construction has ever finished there is literally nothing more at Kakome Beach than pebbles and a pier to jump off from. So don’t even expect to be able to buy any drink.

What Else To Do At Kakome Beach

On the hill next to Kakome Bay, you can see the abandoned Monastery of Saint Mary. You can reach the monastery via a short hike over a track that starts next to where the road ends at the construction site entrance.

If you like hiking, you can hike a bit further op the hill for a great view over Kakome Bay on the left, and another beach on the right. The other beach is called Krorëza Beach and can only be reached by boat. 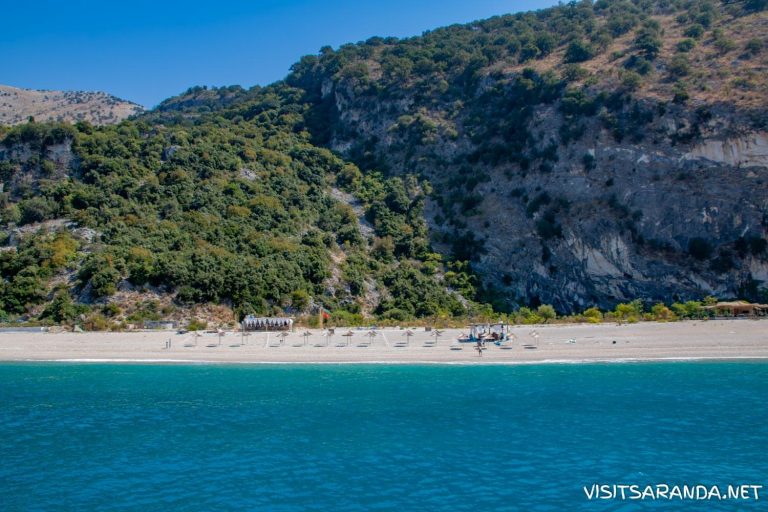 Duration: 6 to 8 hours
Book From €39.47
This boat trip is a day of adventure in which you will make an unforgettable boat trip along the beautiful Read more...
Boat Tours 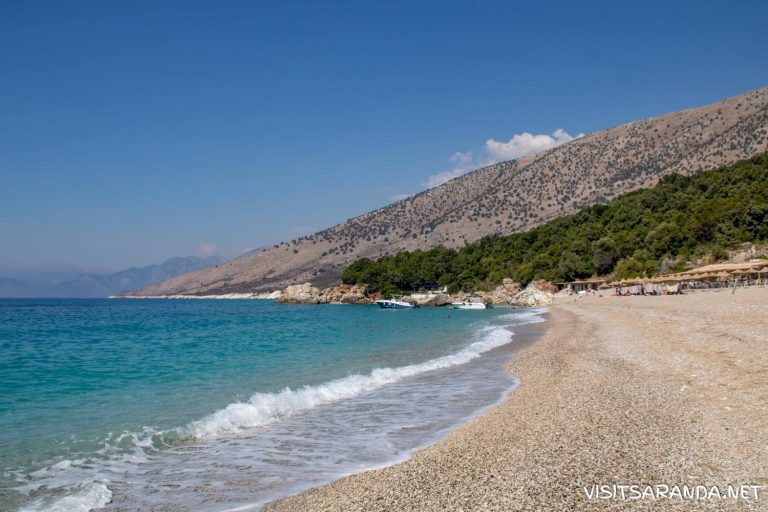 Duration: 7.5 hours
Book From €74.00
This boat trip is different from the crowded large boats as this tour offers a trip for a private or Read more...
Adventure 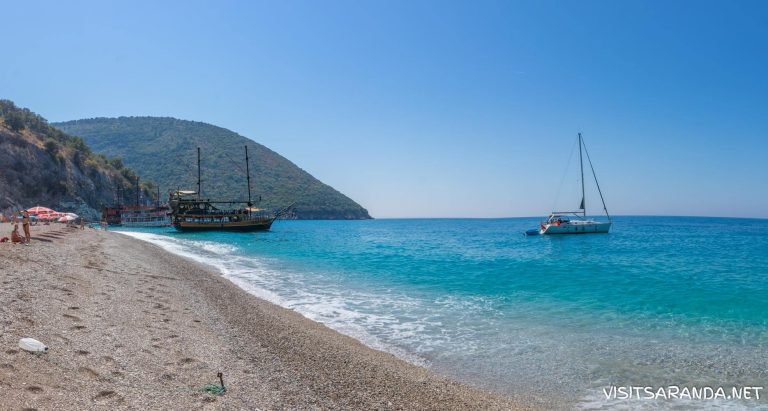 Duration: 1 Day
Book From €70.00
During this active tour you will make a breathtaking hike and stay the night camping at a beautiful virgin beach. Read more...
View all activities in Kakome Beach 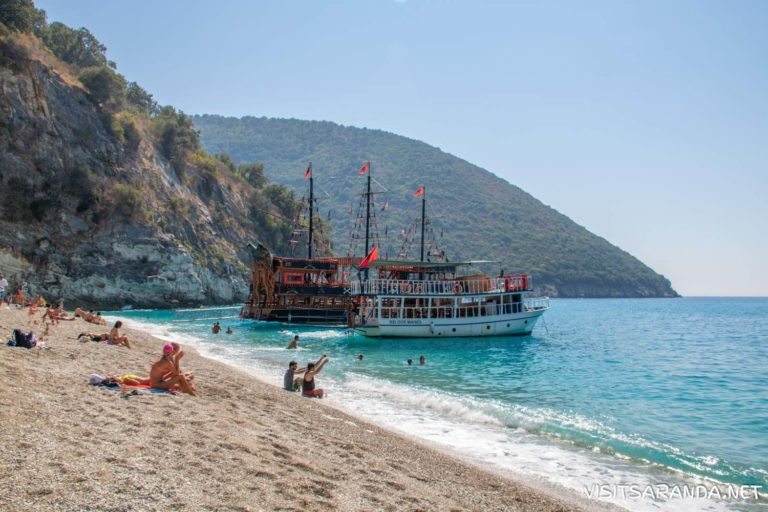 Saranda
From Saranda: 9.06 km
About Krorëza Beach Krorëza Beach is a deserted beach in the Albanian Riviera, just above Kakome Bay. The beach is Read more...
Religious Sites 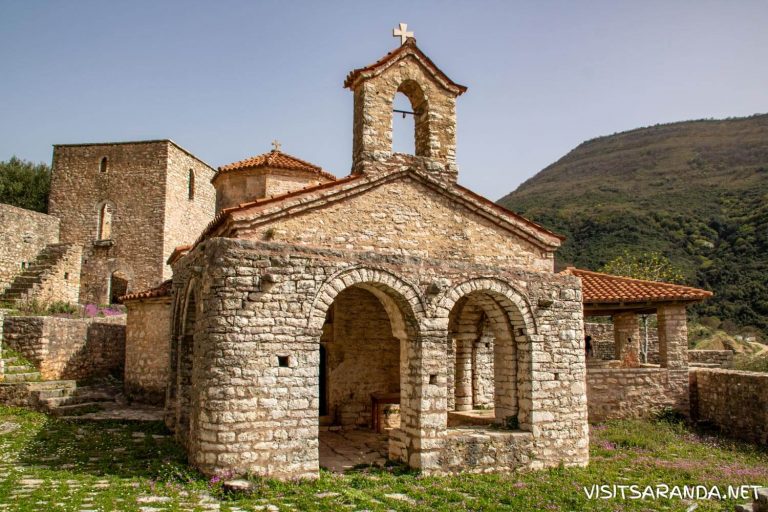 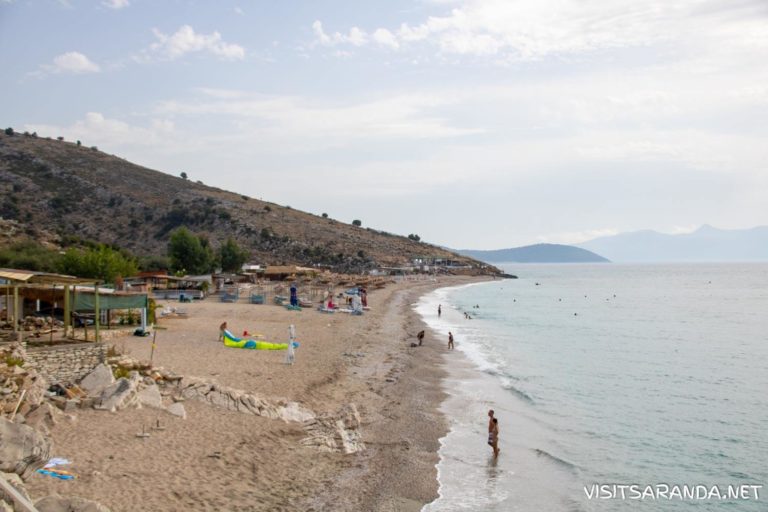 Lukova
From Saranda: 13.68 km
About Lukova Beach Lukova is a coastal village on the Albanian Riviera and has two main beaches, which are a Read more...
View all